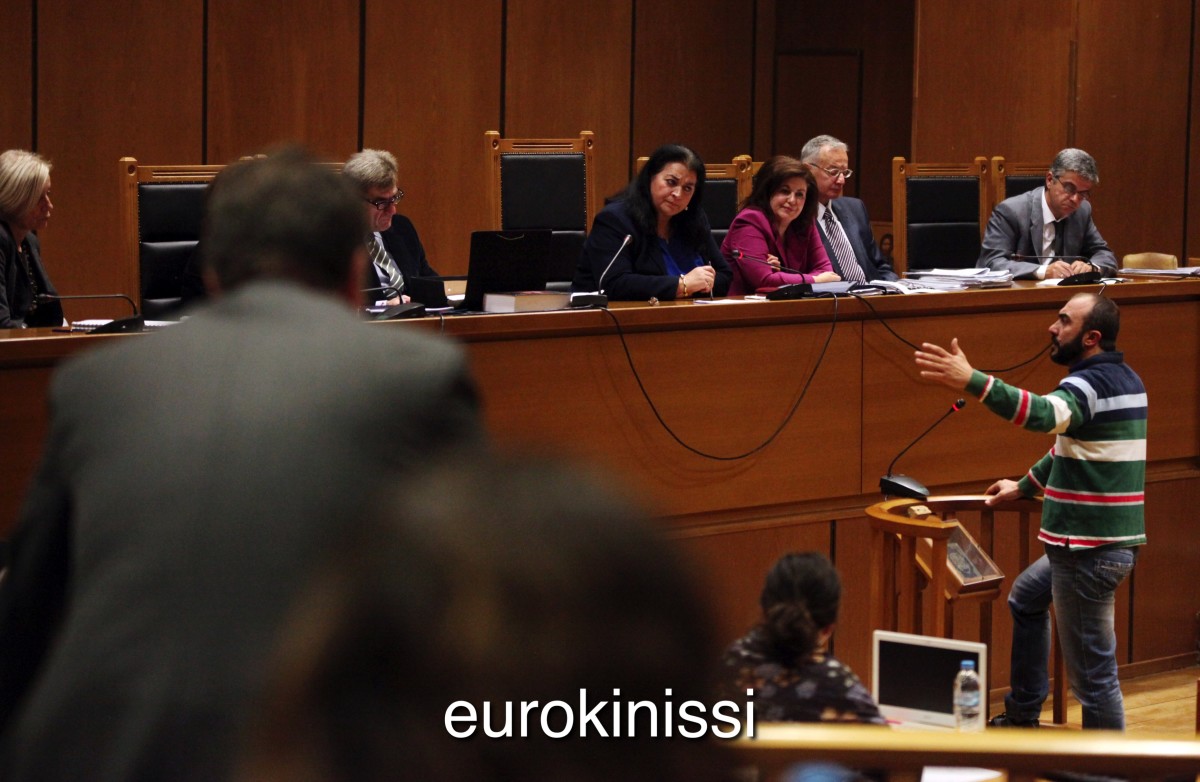 Day 100: Continuation of cross-examination of witness and plaintiff Sotiris Poulikogiannis

The courtroom remains open to the public upon presentation of a state ID card, which is retained by court authorities for the duration of the session, until all audience seats in the courtroom are filled. There were journalists present and an increased number of spectators.

Present at the proceedings were defendants Ioannis Kastrinos and Ioannis-Vasileios Komianos, while the civil action’s request is still pending regarding the personal appearance of the defendants accused as perpetrators in the separate case of the attack against members of PAME.

III. Continuation of cross-examination of witness and plaintiff Sotiris Poulikogiannis by the defense counsels

The defense counsel for defendant Anadiotis proceeded with his questions. Responding to questions from defense counsel Kontovazenitis, the witness testified that after the attack on his person he went to Thriasio Hospital, where he underwent medical examinations, including a CAT scan. The defense counsel asked the witness whether he was hospitalized or if the wound proved a minor one. The witness answered that he was not admitted to the hospital, but that he sustained many hits; that he was drenched in his own blood; and that he had dizzy spells for days afterwards.

The defense counsel Kassis proceeded with his own questions. The counsel’s questions caused tension in the courtroom, since he mainly focused on the witness’s participation in the riots that took place in Syntagma Square in the 19th and the 20th of October, connected to a 48-hour general strike. The witness responded that he didn’t know the meaning of the term KNAT [satirical portmanteau of MAT (riot police) and KNE (The Communist Party Youth League), referring to the groups that usually clash with the police during KKE rallies] and that in October 2011 he participated in a rally where hundreds of thousands of protesters marched. During the peaceful rally they were attacked by groups of hooded rioters, but the case never made it to court, since there were no defendants named. Commenting on photographs that were shown to him he said they were from the 48-hour strike, that saw every trade union protesting against the memorandum. Tens of thousands of people had been gathered since nine in the morning. At about 15:00 about 200-300 hooded rioters gathered in front of the Grande Bretagne hotel on the square carrying backpacks that resembled the ones used by the Greek Police and wearing gas masks. He stated that the hooded rioters started breaking the marble steps and throwing chemical grenades while indiscriminately attacking peaceful protesters. More than 200 protesters were injured and one, the trade unionist D. Kotzaridis, died. The witness stated that they had the ultimate obligation to defend themselves and that the only ones that adopt such measures are Golden Dawn. This, he said, must be proven in this court. The witness asked of the court to be allowed to bring his own photographs from the march in question, and the attack on the protesters, but the presiding judge rejected the request as it has not been provided for in the process. The defense counsel then submitted questions regarding the trade union and various organizations. The witness responded that he is a member of the Metalworkers Union and that in the union’s previous elections there were two opposing factions. He also said that “Self-Organization” was the contractor- and G.D.-sponsored faction which received only 28 votes, and that these were the same people that transferred to the Agios Nikolaos union formed later by the Golden Dawn. Finally, in response to the question whether the G.D. labor union has threatened workers, the witness responded that they had, and recounted the Boutas incident, as well as the video of the threats uttered by Lagos a short time before the attack on PAME.

In response to question by defense counsel Tsagas the witness stated that two or three meetings have taken place in 2016 with minister Dritsas, regarding the port, the infrastructure, and the workers. They [the unionists] were trying to pressure the minister to approve construction of the tanks, so that the workers won’t lose wages. The witness also testified that he is qualified to attend meetings that have to do with the [S/Y] central command, and that he gets notified about the press releases of the Metalworkers’ Union. The defense counsel then asked the witness if he’s ever heard of Golden Dawn asking for wage cuts, and if they call for other parties to take part or if they want to decide by themselves. The witness stated that the forked language of Golden Dawn is well known; that in the video of August 8th, 2013 taken in the cantina, Lagos answers someone with the phrase “Let all parties come”, but in the next sentence says that “the PAME lackeys will be stamped out”. The witness went on to say that Panagiotaros has said that it’s not the wages that are important, but PAME, because it is well-known that PAME fights to keep the wages stable. He also stated that in an event hosted by Golden Dawn on the 10th of September, 2015, Kasidiaris stated that the S/Y will open again under the control of G.D. And that this was exactly the reason for the attack two years back, on September 12th, 2013. In response to a relevant question, the witness stated that 90% of Golden Dawn’s parliamentary work has been in support of ship-owners.

In response to more questions by the defense counsel (for Michalaros) the witness stated that Michalaros works as an assistant tube welder and that he has been working since 1999, and that there’s a possibility he has been working on his own for Pyrinis before September 2013, and that in any case there was a mass hire of Golden Dawners following the PAME attack. Finally, he said that Michalaros had worked with Fyssas in the past and that it’s possible that on the day of the attack on Fyssas in Keratsini, he was identified by Michalaros.

Defense counsel Zografos then showed the witness some photographs in which he confirmed a KNE event, with a martial arts demonstration from legal sports clubs. Describing the photograph the witness said that the demonstration concerned self-defense methods and had to do with ways to disarm an opponent or deflect attacks. The witness went on to say that the people demonstrating martial arts were showing ways to defend against a stabbing, and he also remarked that if Fyssas had been trained in self-defense maybe he would be alive today. In response to a question by the defense counsel whether the practice of martial arts is a privilege of a specific ideological group, the witness answered that he never accused Golden Dawn of the practice of martial arts, but for using martial arts enhanced with weapons they [the Golden Dawners] made in the workshops. Responding to more questions the witness stated that the PAME is an organization without a head, but that there is a leader in each union, such as himself. Talking about the period in which the attack on PAME took place, the witness stated that there were unions present in the S/Y. The unions are founding members of PAME. The four leaders, when acting in unison, address the administrative councils and the general assembly, where every decision is taken. The decision to put up posters was a collective one of all unions.

In response to Pantazis for the Golden Dawn’s political stance, the witness said that the G.D.’s ideal are the Nazis, along with other dictatorial and fascist regimes. The defense counsel then asked whether the phrase “the memorandums enslave the people” is a Nazi position. The witness answered that the Nazi parties posing as parliamentary parties routinely express non-Nazi positions. In response to the queston what constitutes a criminal organization he stated that there are criminal organizations that seek to seize power and there are other criminal organizations that seek to traffic in drugs. In another question from the defense counsel whether the witness knows of any racist events with more than 300,000 participants, the witness answered that he knows of the pogroms and demonstrations of Hitler’s Nationalist-Socialist Party.

IV. Arguments by the defense counsels

During the proceedings there were appeals from both sides to put in effect article 333, par. 2 of the Code of Criminal Procedure, concerning the direction of the proceedings and the permissions granted by the presiding judge to the counsels to pose questions to the litigants, while at the same time she does not allow aimless or irrelevant questions. Defense counsel Michalolias requested that all questions be allowed that aim to show the witness’s aggressiveness and unreliability. Civil action counsel Vrettos stated that the witness isn’t under trial and if the court allows the evidential proceedings to progress thus, the civil action counsels will present a statement. The District Attorney maintained that the defense counsels’ questions to the witness concern a different case. Civil action counsel Kabagiannis proceeded with his own argument. The object, he stated, is the criminal organization as it is described in the decree. The witness is called to answer questions about completely irrelevant matters. The CCP rules that aimless and irrelevant questions should not be allowed. The court is obliged to reject these questions. Defense counsel Michalolias disagreed with the District Attorney’s motion on the grounds that the decree must be further elucidated, and that the photographs that were provided to the court be entered in the case file. Defense counsel Kassis added that the witness said that the reason he came under attack was to put a stop to his union-related activities. The questions posed by the defense point to the reverse. The court rejected the motion.

At this point the presiding judge adjourned for Thursday, the 10th of November, 2016, when the witness will continue his testimony, cross-examined by the remaining defense counsels.