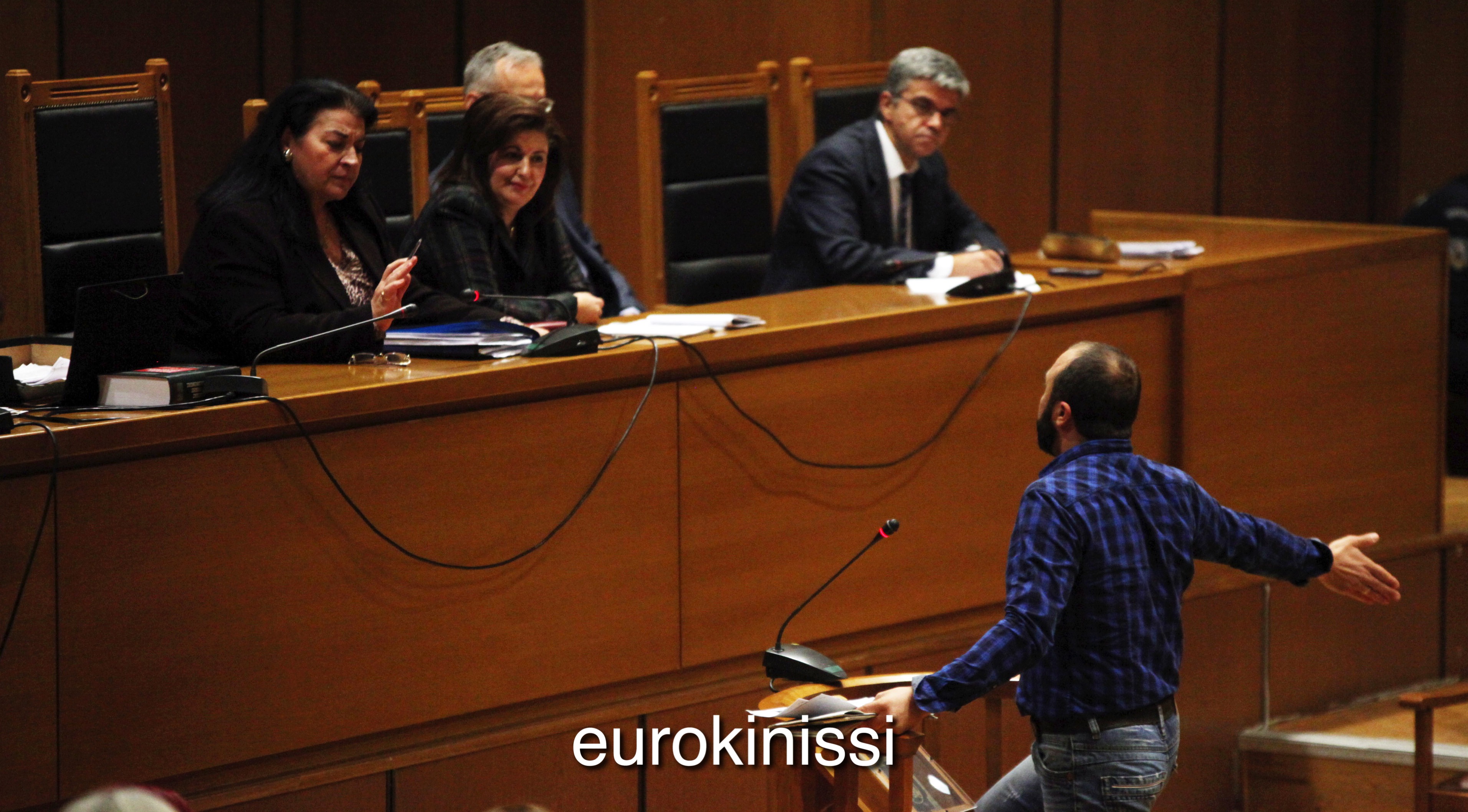 DAY 98: Continuation of Poulikogiannis’ witness testimony and recess due to tension

The courtroom remains open to the public upon presentation of a state ID card, which is retained by court authorities for the duration of the session. However, due to the great number of spectators present from both sides, after a short recess some spectators were seated in the seats reserved for the civil action lawyers, in order to prevent further tension outside the court.  There was also significant presence from the members of the press.

The hearing was marked by high tensions, verbal insults, and several incidents inside as well as outside the courtroom. In the beginning the defense counsels requested that the chief of riot police be called to the court , because before the start of the hearing some Golden Dawn members had been attacked with teargas. The protests were heatedly relayed by members of the audience to the police officer present in the courtroom. Some members of the audience verbally attacked one of the civil action counsels. Following a proposal by the public prosecutor, the court ruled that such a course of action lay outside its jurisdiction and informed that anyone wishing to do so could file a complaint at the relevant police station.

The witness testimony was interrupted for quite some time after another incident outside the courtroom, at which point the audience on the side of the Golden Dawn, as well as some of the defense counsels, left the courtroom, while shouting at the police that they were being attacked.

The hearing was then resumed and more members of the audience were seated in the seats behind the civil action counsels, in order to observe the trial proceedings. However, the proceedings and the witness testimony were adjourned a while later, when it was pointed out that a member of the audience on the Golden Dawn side was taking photos. Afterwards, a question posed by the civil action lawyers further destabilized the order in the court, and the defense counsels resorted to shouting recriminations, chanting slogans, and even insults.

The witness resumed his testimony responding to questions concerning the case from the civil action lawyer Mr. Theodoropoulos. The witness reported that the daily wages of a worker in the Perama Shipping Yards ranges between 48 and 75 euros per day, that accidents at work are common, and that the Yards employ foreign workers as well as Greeks. The trade union’s position regarding the wages of Greeks and foreigners is “equal pay for equal work”. Concerning the attack on his person and other members of PAME, he stated that Pantazis had said that “I won’t be the one that will pay for Kasidiaris’ extreme measures”, something that was also reported in the media. Concerning the
“makeshift construction” which, he stated, a few of the perpetrators were carrying, he said that it had a length of about 3-5 feet and that it was later found outside the Golden Dawn offices. It was also identified by witness P. Goutis.  They also stated that Mr. Lagos had shown up and started threatening the policemen at the scene.
Concerning the perpetrators’ murderous intent, Poulikogiannis said that it is indicated by the way the members of PAME had been hit, which is to say that the perpetrators aimed for the head and that they left open no avenue of escape. According to the witness, they didn’t want to just give them a scare, but they had been forced to leave because people had been coming out on the balconies of the surrounding apartment blocks, and they were shouting that they would call the police, and also because the pre-planned duration of the attack had elapsed.

In addition, he stated that the police did not conduct a search of the perpetrators’ motorbikes, although there was a testimony that the motorbikes had been stationed for quite some time afterwards at the end of the Perama area.
Concerning the Fyssas case, he stated that he is acquainted with the family and that the father of the victim is a colleague. He stated that he has read the various reports in the media which said that when Roupakias was detained in the squad car, he had told the policemen that he was one of them, and that he had been smoking a cigarette.
For the attack against himself and other members of PAME, he stated that from what he had read in the newspapers and on the internet, he understood that Golden Dawn wanted to present the incident as an act of provocation. More specifically, he said that it seemed that Kasidiaris wanted to take control of the situation by saying that the accusations were nothing but slander, because Golden Dawn had intended to start a union in the vicinity.

About the role of Lagos and his connection to the attack he stated that he had read of the sms’s that had been published in the press, which concern its prelude, its duration, and its aftermath, and which had been sent to Patelis. The first sms reads “the commies will get it good today, Tasos (i.e. Pantazis) gathered about 30 and are headed that way”. The witness remarked that from the sms it is clear that there had been a call and that the group did not meet by chance. He then proceeded to mention more sms’s, to further support his argument, which had been printed in the press and read “They went to put up posters and we cut them down”. In response to a question from Patelis, whether the attackers would continue elsewhere, Lagos answered “No, I told them to stop”, and Develegos replied “good job, we wouldn’t want anyone to get caught”.

He also remarked on sms’s that were exchanged during the attack, such as “we went down there in the cars”, “they’re chasing them right now”, but also others that concern the aftermath, such as “we crushed them, we obliterated them”. He also referred to an sms by Pantazis sent to the witness himself, which read “next time stay at home”. He also mentioned a published letter sent by Lagos when he was in prison, which does not refute the aforementioned exchanges. The witness maintained that it was clear that Lagos coordinated the attack, and that he was simply trying to reverse the reality of what had happened by saying that the Golden Dawn members had been attacked and that Chatzidakis had been hit by a stone.

Furthermore, by drawing on accounts in the printed and internet media, he said that immediately after the attack, the Golden Dawn Nikaia local cell addressed the Nikaia members telling them to be ready at any time to head out to Perama, by orders of Lagos himself.

Concerning Lagos, the witness said that he’s not just a random GD member, but a Golden Dawn MP, who is also a member of the core of the party. In addition the witness had heard that he was chief of security. For this reason he believes that Golden Dawn had full knowledge of the attack, since a party member so close to the leader could not act of his own accord, especially since the party operates on military logic. Besides, he pointed out, the attack on PAME had a lot of similarities with the murder of Fyssas.

The witness stated that he had heard of no official condemnation of the attack issued from the Golden Dawn leadership, nor a denial. They only tried to cover things up. Questioned about the attack on Kousouris (1998), for which Androutsopoulos (also known as Periandros) was convicted, the witness stated that from what he read in the press the attack resembled a Golden Dawn attack, and not the convicted’s personal one, who was himself a member of the Golden Dawn. At this point the defense counsels reacted and started shouting that the first count of the indictment of the case in question starts in 2008.

When asked about the hierarchy and discipline within Golden Dawn, the witness stated that it has all the characteristics of a national-socialist organization, that it has a military structure, and that it operates under the Führer Principle, which has also been expressed in the indoctrination talks of leading party members. For example, Patelis has stated that “we do nothing without an order from above”, “When you disobey your superior, you’re questioning the leader”. He said that he had read and watched statements by leading GD members, such as Kasidiaris, who has said that “No one does whatever he wants.” In point of fact, he states that in April 2011, on the anniversary of Hitler’s birthday there was a relevant article in the Golden Dawn magazine concerning a tragedy that was not consummated. At this point the defense counsels once more strongly protested. Concerning the murder of Fyssas, he said that once more there was no condemnation, only an announcement from the Golden Dawn leadership which attributed the killing to differences between the fans of different football clubs, and which was in effect another attempt at a cover-up.

He also said that Michaloliakos had said that they didn’t know who Roupakias was, despite the fact that the witness had seen photos of the latter in the press, when he was in Neda for the instruction and swearing-in of new members, such as Kazantzoglou.

The witness then answered Mr. Malagaris, a civil action counsel, that he couldn’t be sure about the age of the persons that had been wearing helmets, but that there were about 15 people wearing helmets and 15 older people as well as minors.

In answer to another question Mr. Poulikogiannis said that an assault squad, when not attacking, is lined up like a parade, at least from what he’s seen on the internet. Mr. Malagaris then asked him, saying that he has already testified that he didn’t hear an order given during the attack against his person, if he heard earlier any order when the Golden Dawn side of the audience left the courtroom.

This question caused a storm of protest from the audience and defense counsels, and as a result the hearing was adjourned until 3 November 2106, amid slogans chanted by the audience, intense altercations, and a particularly tense atmosphere.