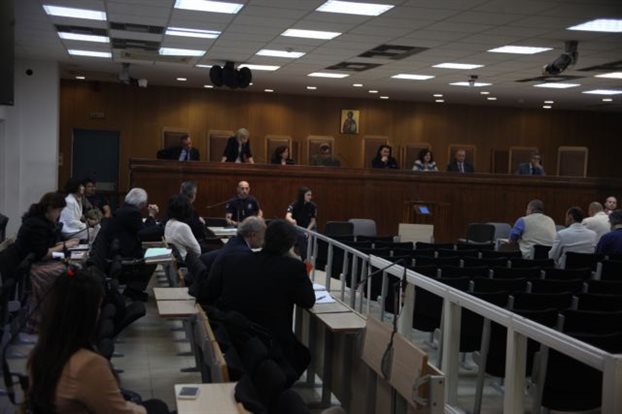 Day 96: Statements by the defense counsels

The courtroom remains open to the public upon presentation of a state ID card, which is retained by court authorities for the duration of the session. Present at this hearing were some members of the press as well as an increased number of spectators.

Defense counsel Karydomatis (for Evgenikos and Pantazis) said that the authorities found in his principals the perfect scapegoats. The defendants were sitting in plain view, eating their lunch, since they had done nothing wrong and had no reason to be afraid or hide.

Defense counsel Poulia (for Th. Marias) said that she doesn’t accept the identifications made by the Egyptian witnesses because the lighting and other conditions did not allow the witnesses a good look at the attackers. Concerning the Tatsiopoulou deposition, the defense counsel said that the witness saw stones in the bed of the truck, and so it has not been proven that the attackers brought with them guns, since they would gather stones from the surrounding area. Concerning the deposition of the policewoman, the defense counsel said that judging from the bearing and appearance of the defendants, it seems that the persons described by the witnesses hadn’t been arrested. The defense counsel also said that the attackers’ intent to proceed to the inside of the house was never proven, neither was the question whether the persons on the roof were the same as the ones at the Egyptians’ house, or if their vehicles were the same. The defense counsel did not accept the description of the Egyptians who maintained that they were trying to deter the attackers from getting into the house by throwing cans of food from the window, since, she said, there is a tree outside the window that would prevent such a measure.

Defense counsel Tsagas commented that the court decree is patently wrong and that it became clear from the testimonies that the sequence of events is incorrect. The attackers did not have deadly intent and said intent isn’t evident from the witness’s wounds to the jaw and sides. The defense counsel also announced that it was proven that the police was notified by Ahmed and arrived at the scene 10-15 minutes later. As a consequence, the argument that maintains that the attackers wanted to murder Embarak, but had to quit the scene because the police arrived, isn’t valid. The defense counsel did not accept the witnesses’ identifications.

Defense counsel Aggeletos said that the civil action’s claim that the attack had racist and xenophobic motives is untrue, since many other businesses and immigrant houses were never attacked.

Defense counsel Velentza commented that the Abu Ahmed brothers, but also Tatsiopoulos, talked with the policemen that arrived immediately after the attack, so the incorrect sequence of events in the decree isn’t a random occurrence. She also stated that it was shown that the Egyptians’ cars could be easily located because they were smelling of fish. The defense counsel disputed the witness’s claim that he couldn’t recall what had been said in a TV show where he participated along with the Mayor of Perama. The defense counsel then supported that the witnesses lied about the way they found out about the video of Lagos, and that a racist crime cannot be said to have been committed, because Embarak Abuzheed received a residence permit as a result of the attack on his person. Finally, she commented that the witnesses failed to answer why the attackers never entered their house, since as they said there was access to the building’s interior.

Defense counsel Papadelis stated that the witnesses are unreliable and they never explained how and why Abuzheed was hit. He also did not accept the witnesses’ identifications. As he said, the defendants were conjecturally involved in the case at hand and denounced the state apparatus for meddling and mishandling this particular case. He went on to state that both the decree and the hearing process are inaccurate.

Defense counsel Roussopoulos (for I. Lagos) said that the contentious video where the MP said that the Egyptian fishermen must be held accountable is a fabrication, since they isolated a single phrase from a 45-minute speech by Lagos. The defense counsel also disputed the reliability of the Egyptian witnesses, based on the contradiction that comes up when the victim says he was sleeping on the roof because it was hot, but admits to using a blanket. The witnesses are unreliable, the counsel maintained, because they say they don’t have any money, yet visit Egypt regularly.

Defense counsel Alexiadis (for I. Lagos) commented that every witness tried to connect their case with another case which concerns the major case of the trial, and that they tried to create impressions on the audience. He also said that the case has been mishandled by the court. As for the video of Lagos he said that it wasn’t admitted from the start in the case file but that it was added later, and that his principal repeats in every speech that the illegal immigrants should be legally deported. Finally, he said that the witnesses commit a multitude of criminal offences, since every year they add another little piece to their testimonies.

After the statements regarding the case of the Egyptian fishermen were completed, the presiding judge called to the stand the next witness, S. Poulikogiannis, to testify about the attack against the PAME members. Civil action counsel Vrettos (for the PAME members) deposited a document to the court claiming that the witness had an urgent legal obligation at the D.A.’s office in Kozani, and couldn’t attend. The counsel also request the personal appearance of defendants Pantazis, Antonakopoulos, Kastrinos, and Chatzidakis, which are accused as perpetrators in the PAME case.

Defense counsel Papadelis requested of the court to postpone the hearing scheduled for the 31st of October, as he and other defense counsels will attend another trial and won’t be able to be present. The presiding judge rejected the defense counsel’s request.

The court adjourned for the 31st of October, at 09:00, at the Court of Appeals, where the examination of witnesses involved in the third case of this trial is slated to begin, namely the attack against the members of PAME.