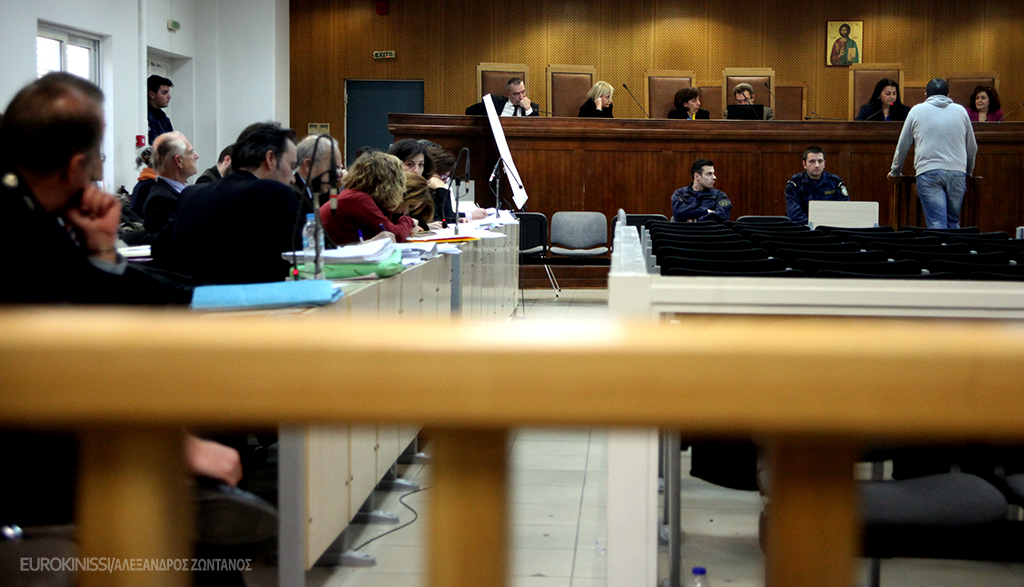 DAY 36: THEY WERE POISED TO ATTACK

Hearings remain accessible to members of the public, provided they present their identity cards at the entrance. There were more members of the public in attendance than at the previous hearing. However, some seats in the gallery remained empty. The spaces reserved for journalists are almost always occupied.

Six (6) defendants were present at the beginning of the hearing; thirty-six (36) were registered as absent. Twenty-seven (27) were represented by their counsel.

As the presiding judge, Maria Lepenioti, read out the names of the defendants, it emerged that Giorgos Roumpekas (counsel to Giorgos Roupakias) was not present in the courtroom. Given none of his colleagues was willing to stand in for him, the judge delayed the beginning of the hearing by 15 minutes until he could be located.

The counsel arrived from Corinth at 11am. The judge asked him to name a substitute. After apologising to the court, the counsellor explained that none of his colleagues would be willing to defend his client on his behalf.

The judge asked counsels to inform the court on how they stood on the decision of the bar association presidents to call a recess for lawyers from 9–15 December 2015 for the purpose of revising the code of civil procedure.

Civil counsel Chrysa Papadopoulou (for Irini Fyssa) took the floor and stated that the current trial would not be affected by the lawyers’ recess. Given the temporal restrictions on administrative detention (under which a number of the defendants are currently held in prison), the Piraeus Bar Association has authorized the court to schedule hearings in the period from 9–15 December 2015.

Civil counsel Andreas Tzelis (for the Fyssas family) stated that he had submitted a request on the subject to the Athens Bar Association and expected a response within the day.

Civil counsel Antonis Adanasiotis, a member of the Athens Bar Association board, spoke on behalf of civil counsels representing the PAME trade unionists. He explained that the lawyers’ recess in question is an important one, in which he and his colleagues would want to participate without, however, delaying the trial. He proposed to resolve the matter by scheduling two further hearings in December to make up for the time lost during the recess.

Civil counsel Thanasis Kampagiannis (for the Egyptian fishermen) seconded Adanasiotis’s motion, pointing out that it was not clear whether all counsels will be given time off to participate in the recess, given not all counsels represent defendants whose administrative detention was scheduled to expire soon.

The judge asked both defence and civil counsels to secure permits from their respective bar associations so that the trial could proceed. The presiding judge announced that ten hearings are scheduled for January, on the following dates: 7, 11, 12, 15, 19, 20, 22, 26, 28, and 29.

Counsel Adanasiotis again took the floor and requested permission to make a statement on behalf of the civil counsel and asked that it be placed on the record. He condemned defence counsel Stathis Karydomatis’ assault on a German citizen and on a Greek citizen at the previous hearing. It was not an isolated incident, but part of a broader climate of intimidation fostered by the defendants and their counsel. The court could not simply wash its hand of it; it had an obligation to ensure the safety of witnesses and the public. The necessity to transfer the trial (as promised by the justice ministry) was clearer than ever.

The judge recognized that civil counsel’s walkout from the courtroom during the last hearing was not without reason. The record will show that counsels withdrew because they did not feel safe. She added that counsel Adanasiotis’ statement would not go on the record.

The judge followed to call witness Paraskevi Karagiannidou to the stand to continue her testimony and to respond to questions from the civil counsel. The witness took the stand, stating she preferred not to be photographed.

In response to questions from Papadopoulou, the witness testified that Fyssas and two of his friends had stayed behind; each of them was beaten by two or three Golden Dawners. She said that she gave a brief, initial statement to Attica General Police Headquarters (GADA). Subsequent statements were more extensive as she formulated it in response to specific questions from the investigations magistrates.

The witness reassured the court that she had no doubt that two people stayed behind with Fyssas; one friend who had initially started running away from the Golden Dawners turned around and ran back towards Fyssas.

In response to questions from civil counsel Eleftheria Tompatzoglou (for the Fyssas family), the witness said that it was obvious who the victim and who the aggressor were. She saw two police officers – a man and a woman – run to catch Roupakias. Then a DIAS motorcycle police unit arrived. The witness explained that Golden Dawn organised motorbike processions in order to intimidate people. The witness herself was terrified during the attack. There was no doubt in her mind that she had an obligation to testify, but this is not to say that she wasn’t afraid to do so.

In response to questions from civil counsel Takis Zotos (for the Egyptian fishermen), the witness explained that the event had scarred her for life; a man had been killed in front of her. The assailants’ clothes and the way they attacked it clear that the murder bore the hallmark of Golden Dawn. The witness could not remember the specifics surrounding Golden Dawn’s actions in the Athens districts of Ilioupoli and Agios Panteleimonas. Though she knew that Golden Dawn had killed one migrant, beaten others and destroyed migrant vendor stalls in street markets, she could not remember whether these events were common to a particular neighbourhood. The witness said she couldn’t remember any of the assailants making any attempt to conceal their face or their political inclination. The way they moved in unison suggested there had been an agreement among them, but it was only later that the witness found out from the media that, that night, the Golden Dawners involved in the attack had coordinated themselves using text messages and phone calls. The Golden Dawners had run from Tsaldari street towards Salaminos street in unison. Those who attempted to free Roupakias from the policeman lagged behind a little, but soon caught up with the rest after they’d given up on retrieving Roupakias. No one left the scene before the police arrived, who came too late in any case: after Fyssas had been stabbed. The witness did not see the police arrest anyone else.

Responding to questions from civil counsel Kampagiannis, the witness clarified that the Golden Dawners who stood on the pavement were watching the assault. Those on the median strip moved to attack Fyssas and his friends. When the second unit joined them, Fyssas and his friends had already been severely beaten. The shouting from the Golden Dawners was terrifying. The witness did not flee because there were people everywhere; she felt trapped. The Golden Dawners circled Fyssas so that no one could leave or enter the scene as he was being beaten. The counsel showed the witness some photographs. The witness described a room in which some form of class or lecture is taking place; one man is holding a knife and is gesturing as though in an effort to teach someone else how to use it. The posters on the wall and the clothes of the people depicted make it clear that the space belongs to Golden Dawn and that the people in the photograph are Golden Dawners. It looks as though the man holding the knife is angling it towards the other man’s heart.

At this point, defence counsel Dimitra Velentza (for Thomas Barekas, Aristotelis Chrysafitis, Elpidoforos Kalaritis, Nikos Kouzilos and Theodoros Stefas) intervened to object to the civil counsel’s use of the photograph given it was procured without a warrant.

In another photograph, a Golden Dawner holds a weapon to someone’s head. The background and faces are the same as those in the previous photograph. The judge disallowed a question from the counsel on whether the photograph was consistent with the image of a political party.

Responding to questions from civil counsel Kostas Papadakis (for the Egyptian fishermen), the witness said that the photograph of the man with the knife was reminiscent of her experience on the night of the Fyssas murder.

Here, the court clerk announced that he could not stay beyond noon, as he was scheduled to participate in a general assembly of his trade union.

The court adjourned until 10am on 9 December 2015, when counsels will be provided with permits issued by their respective bar associations to attend the trial during the lawyers’ recess.