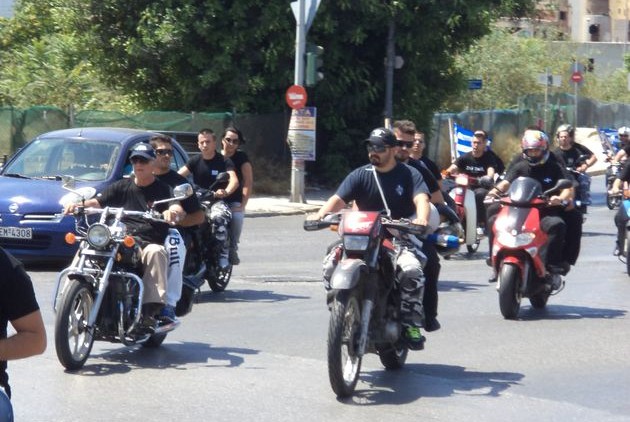 AN IMAGE of Adolf Hitler, his right hand upturned giving the fuehrer’s salute. “Millions stand behind me!” — his boastful slogan. To complete the photomontage, towering behind him the outsized cutout of a German capitalist stuffing millions of Reichsmarks into Hitler’s palm. ??
The Meaning of the Hitler Salute is one of the finest works by the great left-wing artist John Heartfield. It leaps to mind this weekend in Athens on the eve of the third major case forming the bedrock of the already 18-month trial of the Greek neonazi Golden Dawn party as a criminal organisation.

This morning Sotiris Poulikogiannis will take the stand before the three judges hearing the case in the central Athens court.

He is a leader of the metalworkers’ union in the dockyards of Piraeus.

Together with about 20 other communist activists of the All-workers Militant Inter-union Front (PAME), he was out flyposting on September 12 2013. They were set upon by a gang of 50 Golden Dawn storm troopers.

It was no chance attack. Two or more “battalion squads” of Golden Dawn thugs met up armed with crowbars, wooden staves and knuckle-dusters. As soon as they had intelligence from spotters that Poulikogiannis and the trade unionists were gathered in a vulnerable place — on the streets at night — they savagely attacked.

Golden Dawn MP and leader of the assault Yannis Lagos texted in triumph afterwards to the neonazi command structure: “We massacred them!” Poulikogiannis was, indeed, nearly murdered. He and eight others suffered grievous wounds and were hospitalised.

They will gather outside the court on Monday morning as part of a major and united show of strength by all the forces of the trade union and anti-fascist movements aiming to bring the greatest public focus on this new phase of a trial that will last well into 2018.

The case of the attempted murder of left-wing trade unionists in the port of Athens throws the brightest spotlight on “the real meaning” of Golden Dawn. ?

It is the real meaning of fascism, which it tries to obscure beneath what the observer of the nazis’ rise in the 1930s Daniel Guerin called a fake “demagogic anti-capitalist” veneer.

Fascism is not simply or directly a manufacture of the big business class. But it does — as Heartfield’s montage shows so brilliantly — serve ultimately as an instrument of big business. And it has only ever made serious advances with the support of at least a section of the Establishment and its state mechanisms.

The story of the attack on the PAME trade unionists reveals perfectly the contours of this dual nature of the fascist threat.

Golden Dawn broke through electorally in the two general elections of 2012 in conditions of a collapsing economy and of governmental parties turning to racist scapegoating and cold-war-era attacks on the left.

It was fifth placed in the parliament with 18 MPs. But like other far-right and fascist formations in Europe, it faced the problem of how to make further inroads into a political system that still excluded it from the direct exercise of power. ??Its distinctly fascist answer to that strategic conundrum was to place at the centre of its activity the creation of battalion squads of paramilitary fighters aiming to exert physical control of neighbourhoods.

It would then offer itself as the militantly effective force for “order” and the crushing of popular dissent to a business class and to state authorities that were reeling from the scale of social revolt and the growth of the radical left.

The strategy was not without success. In the middle of 2012 the international media suddenly discovered a neighbourhood in central Athens called Agios Panteleimonas. ?Golden Dawn had established some grip on the poor area through attacks on immigrants and running, with the full collaboration of the local police, a protection racket masquerading as a kind of robust neighbourhood watch scheme.

The fascists’ rise was not through aping the social solidarity movement of community assistance with food and healthcare that sprang up across Greece as the EU-imposed austerity reached 1930s proportions.

Their path was laid by the government’s racism and by local agencies of the state prepared to collaborate with their terrorising tactics — like the near fatal attack on a group of Egyptian fishermen also near Piraeus in June 2012.

The anti-fascist movement rallied in response. It checked the growth of Golden Dawn in the neighbourhoods. In the workplaces there was an even stronger solid front against the fascists having any presence. ?

These were the circumstances in August 2013 when the leadership of Golden Dawn embarked on an audacious plan for a violent escalation the following month to break out of the political plateau they had reached. ??

They began that September with beating up representatives of rival forces at two right-wing annual events commemorating the quisling and anti-communist forces of the 1940s.

If the fascists were to break through, then other right-wing forces had to be made to accept their primacy. ??

Shipyard owners in Piraeus had been desperate to undermine the unions in the dry dock and repair zone. They had tried and exhausted the “usual means” of aggressive industrial relations and anti-labour laws.

Golden Dawn seized the opportunity to sign unemployed workers up to a yellow union. It was thick with rhetoric about standing up to the “international financiers” bleeding the working man dry. ??But it was crafted to serve the national capitalist interests of the industry in Greece that is historically the most corrupt and a pillar of authoritarianism: shipping. ?

Lagos told a meeting in August organised by Golden Dawn that the “abscess of PAME would soon disappear.” ??A few weeks later came the attack on the trade unionists. Five days after that came the murder in nearby Keratsini of Pavlos Fyssas.

The following day, half the members of the Golden Dawn “union” were hired by the chairman of the shipyard owners’ federation. ??But that night, and in the days that followed, an anti-fascist uprising shook Greece.

The violent provocation by Golden Dawn was terrifying, but it did not succeed in terrorising the trade unions and popular movements. Tens of thousands gathered in central Athens a week after the murder, determined to march on the Golden Dawn headquarters.

It was this revolt that forced the then right-wing government, which had been in backchannel communication with the fascists, to allow the prosecution of Golden Dawn which resumes on Monday.

It does so against a backdrop of worsening austerity. Despite the Syriza government’s preparedness to enforce it, the Establishment is still today toying with more extreme means. The unelected senior judges this week struck a blatantly political blow against the government by blocking its tendering process for new broadcasting licences.

For 27 years the intertwined media and shipowners have not paid a single drachma or euro for the private channels they operate. ??It is not only over the defence of working people’s living standards that we need to look to the trade unions and the working-class movement. It is also over the very survival of democratic norms.??

And in that — society as a whole owes a debt of gratitude to the courage of trade union fighters like Sotiris Poulikogiannis.