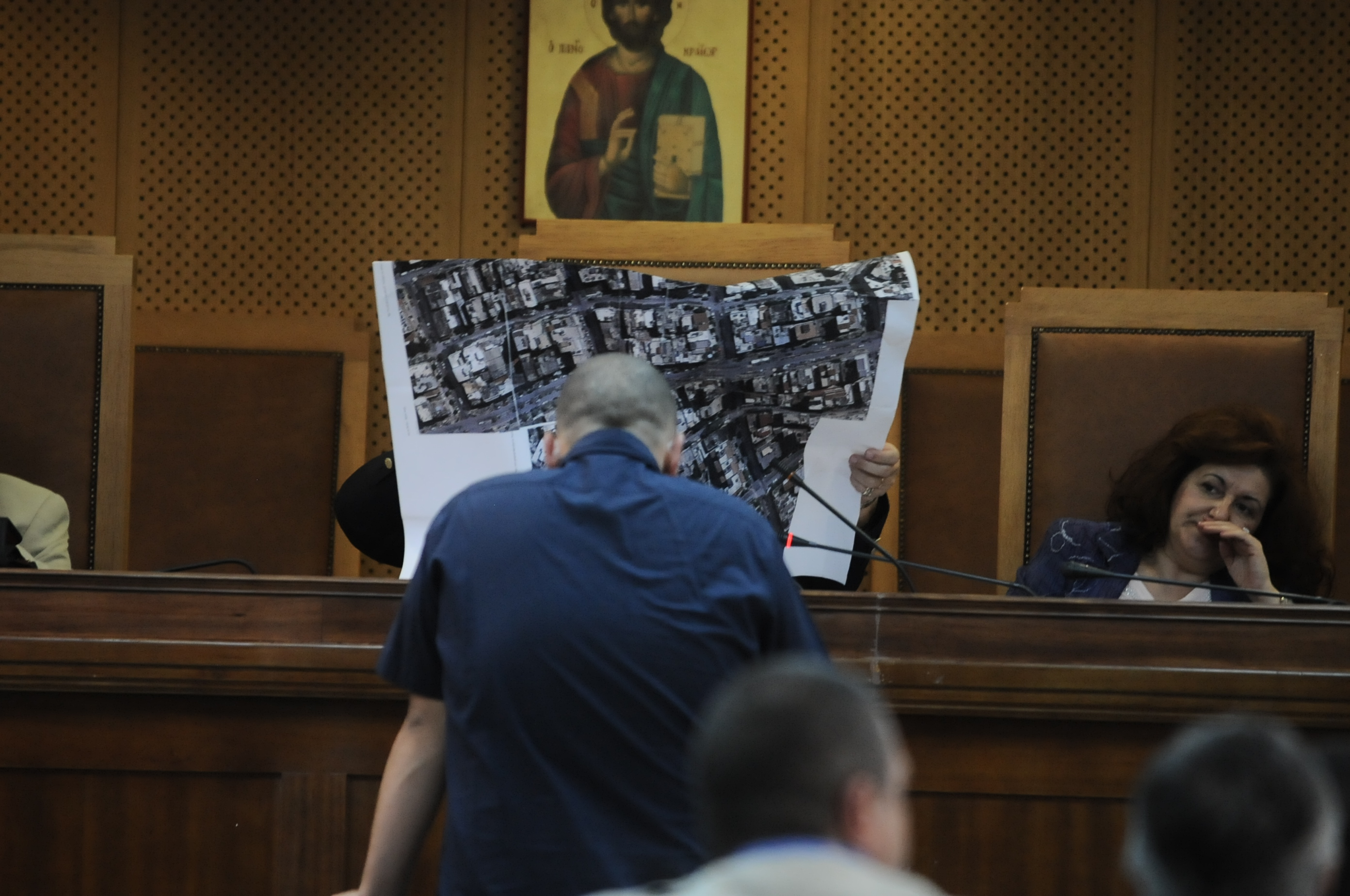 1. Court access
Many seats were empty, even though the police authorities now allow access to anyone wishing to follow the trial, provided they present their identity cards upon entering the courtroom. The venue remains the same. It emerged that the large hall in Athens Appeals Court earmarked as the new venue for the trial will now be used for the trial concerning the smuggling of two tonnes of heroin from Dubai to Elefsina on the Noor One. The decision was made at a meeting held at the Supreme Court on the morning of 9 October and chaired by the justice minister and the president of the Supreme Court. The trail’s presiding judge, Maria Lepenioti, also informed the court that those involved in other criminal cases will be asked to suspend their obligations elsewhere so that the current trial can be conducted at least three times a week. She proceeded to announce the scheduled hearing dates for November (4, 6, 10, 12, 18, 19, 24 and 25 November).

3. Problem with witness Irini Fyssa
Eleftheria Tompazoglou, counsel for Irini Fyssa who was expected to continue her testimony at the hearing, submitted a medical report that revealed the witness is suffering from an aggressive neurovegetative disorder. As a result of her illness, she will remain bedridden for an indefinite period.

4. Testimony of the eyewitness Pavlos Seirlis: questions from the judge

Zotos (showing the witness pictures taken from the hard drives of the defendants, Skarpeli and Patelis): Tell me whether you see a church choir, a group of scouts, party followers or members of a paramilitary unit? Please describe their appearance.
Seirlis: It is a military unit. Military trousers, boots, black shirts, all lined up in order.
***
Thanasis Kampagiannis (counsel for the Egyptian fishermen): Who was the eldest in your group?
Seirlis: Pavlos. I was the second eldest. I was 29 at the time. The attackers were older than us.
Kambagiannis: What kind of combats were the attackers wearing?
Seirlis: Alpine division combats: white, grey, light grey, black.
Kambagiannis showed the witness more pictures and asked if he could recognise any of the faces in the courtroom. The defence objected and Kambagiannis protested that he had every right to ask the question and the court, if it considered that he should not answer, had every right to bar it. The defence argued that the picture was not part of the official evidence.
The judge said that the counsel has the right to display any picture, regardless of whether it is included in the official evidence. She added that the same goes for the defence. The witness recognised the defendant Michalaros.

Kambagiannis: Had the attackers assembled before the assault?
Seirlis: Yes.
***
Kostas Papadakis (counsel for the Egyptian fishermen): How long had Fyssas been writing songs?
Seirlis: 15 years. He made music videos too.
Papadakis: Did you get the impression that these people wanted to create trouble in the cafe?
Seirlis: No.
Papadakis: Did you see the intermediary later at the police station?
Seirlis: No.
***
Haris Stratis (counsel for the PAME trade unionists): Have you seen anything regarding the attack on the PAME trade unionists?
Seirlis: Yes. I watched a video on the internet.
Stratis: What is the video called?
Seirlis: Prick Plebs and Workers.
Stratis: Who says the phrase, “anything that moves is slaughtered”?
Seirlis: Patelis.
Stratis: Does he seem to be wishing something or delivering an order?
Seirlis: Delivering an order.
Stratis: Who is the leader of Golden Dawn?
Seirlis: Michaloliakos.
Stratis: Are other members of Golden Dawn in parliament?
Seirlis: Yes.
Stratis: Do you know what Roupakias said to the policemen who arrested him?
Seirlis: I heard he said, “I am one of you.”
Stratis: At the time, were Lagos and Michaloliakos MPs and the political expression of Golden Dawn?
Seirlis: Yes.

6. Questions from the defence
Giorgos Sotiropoulos (counsel for Ioannis Aggos): How many cars did you have to pick up?
Seirlis: Two.
Sotiropoulos: If it hadn’t been for the intermediary, would you have gone on to Tsaldari street?
Seirlis: Yes. Out of fear.
Sotiropoulos: If there was no confrontation in Koralli, why did this man come and tell you to leave?
Seirlis: He had probably seen what was going on outside.
Sotiropoulos: What time did you leave Koralli? In your testimony in Piraeus you said you left Koralli five minutes before the murder.

Seirlis: The match had ended.
Sotiropoulos: How far were you from the spot of the murder?
Seirlis: 30–40 meters.
Sotiropoulos: In the little time in which you were running, you managed to discern that it was an organised group pursuing you?
Seirlis: Yes. It was clear from the way they were moving.
***
N. Kontovazenitis (counsel for Anastasios Anadiotis): Where were you while the Roupakias–Fyssas fight was going on?
Seirlis: In the ground-floor parking lot.
Kontovazenitis: Do you remember the street name and number?
Seirlis: No, it was two alleys down.
Kontovazenitis: Were you shown many pictures of Anadiotis? Full-length or portrait?
Seirlis: Many were full-length. Anadiotis was probably the one who beat me.
Kontovazenitis: How far from the murder [scene] did Anadiotis allegedly beat you?
Seirlis: 5–10 meters.
Kontovazenitis: What was the name of the bar you were at before?
Seirlis: Souvenir.
Kontovazenitis: Were you there from the beginning of the match?
Seirlis: Yes.
***
Dimitra Velentza (counsel for Ioannis Kazantzoglou, Elpidoforos Kalaritis and Aristotelis Chrysafitis): Were there lots of people on Tzaldari street?
Seirlis: Yes, but not an unusual number.
Velentza: How was the weather?
Seirlis: Fair.
Velentza: What were you wearing?
Seirlis: A white top and shorts.
Velentza: What colour were the shorts?
Seirlis: Denim.
Velentza: How did you walk from Koralli towards Tsaldari street?
Seirlis: At a steady pace.
Velentza: How quickly did you find a cab for your sick friend?
Seirlis: Immediately.
Velentza: What did he have?
Judge: That’s a different question.
Velentza: In your testimony you didn’t say that they said “Come here [and] …”, you said they said “Come on, you chickens”.
Seirlis: As I told you earlier, I hadn’t slept and was terrified and all I could think about was Pavlos’ funeral.
***

Vasilis Oplantzakis (counsel for Ioannis Kazantzoglou) produced maps of the area with which to examine the witness. The counsels stood up to get a better look. At this stage, Takis Zotos turned to the judge and said, “You realise that if you had let us have a projector in here…”
Oplantzakis pointed out Tsaldaris street on the map while the defence counsel objected to the reporters who were trying to get a shot of the lawyers crowded around the maps.
Oplantzakis: What time did you leave Souvenir and why?
Seirlis: So we could join the others and spend the evening together.
Oplantzakis: In your testimony on 18 September [2013] you said that one of the four men was carrying a plank. Was there a building site close by?
Seirlis: I don’t know.
Oplantzakis: If there were four of them and nine of you, why didn’t you take your cars and leave.
Seirlis: We saw they were armed.
Oplantzakis: But you’re strong; why didn’t you defend your friend?
Seirlis: I was afraid.
Oplantzakis: Look at Mr Kazantzoglou (he makes the defendant stand); do you recognise him?
Seirlis: No.
Oplantzakis: Please let that be entered in the record.
***
Ioannis Pagonas (counsel for Ioannis Komianos): Did any of the men in the motorcycle gang follow you?
Seirlis: Yes.
Pagonas: Who?
Seirlis: I don’t know.
***
Christoforos Tsagkas (counsel for Anastasios Michalaros): Did you keep in touch with the others after the crime?
Seirlis: No. I started a family.
Tsagkas: With whom from your group of friends did you run away [that night]?
Seirlis: I helped one person and then I left on my own.
Tsagkas: When you saw Roupakias at the police station, did you recognise him as the man in the car?
Seirlis: No.
***
Dimitris Gavelas: When did you see the video of Patelis?
Seirlis: Two or three days ago.
Gavelas: Did you try to find out if the video refers to a particular incident and whether the things you saw actually took place?
Eleni Zafiriou (counsel for the PAME trade unionists): You mean, did he find out whether they slaughtered anything that moved?
Seirlis: You mean murder? No, I didn’t look into it.
***
Giorgos Roumpekas (counsel for Giorgos Roupakias): What impression did you get from the looks the others gave you? Simple? Threatening? Why did you mention movements?
Seirlis: I saw them sending messages the whole time.
Roumpekas: Were you watching the match or the people sitting across from you?
Seirlis: The match and my friends.
Roumpekas: So what did you end up actually watching? Why did you go there?
Judge: Couldn’t he have been watching everything?
Roumpekas: Was Koralli a big place?
Seirlis: I don’t remember.
Roumpekas: Are the pavements on Tsaldaris street narrow or wide?
Seirlis: Wide
Roumpekas: Why were you on the outside rather than the inside of the pavement?
Seirlis: We just ran.
Roumpekas: You told the investigating magistrate about blows to your head and arms. In the pretrial investigation, you said you didn’t remember the blows. Which is the truth?
Seirlis: The truth is that I was thinking about my friend’s funeral.
Roumpekas: How is it that you could recognise Roupakias six months later but not at the police station immediately afterwards.
Judge: Mr Roumpekas, what is your client’s position?

When Mr Michalolias proceeded to deny he had uttered the phrase about Mr Tzelis, Ms Tombazoglou said: “So you are cowards as well as fascists.”

The trial was adjourned amid this commotion. The next hearing was scheduled for Tuesday, 13 October 2015.