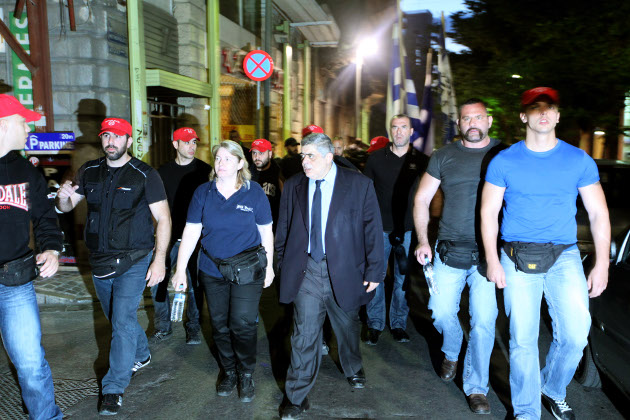 Emboldened by the release of Ioannis Lagos, the last Golden Dawn MP held on remand pending trial, the criminal organisation of Golden Dawn has begun to capitalise on its crimes, attempting to attract publicity for its election campaign.

In publicly accepting the “political responsibility” for the murder of Pavlos Fyssas, Golden Dawn leader Nikos Michaloliakos is in reality accepting the charge of  “directing a criminal organisation” – a charge for which he is standing trial. Such confessions have a pedigree. Dimitris Koufontinas once assumed “political responsibility” for the actions of 17 November, an organisation that was tried under the same article (187.1) of the criminal code as Golden Dawn. Koufontinas paid for his statement with several life sentences. Today, however, Michaloliakos feels he can make the statement with impunity as he grapples for ways to placate his middle-ranking cadres, the cell leaders and the ranks of the assault squads, onto whom he has attempted to pin many of his crimes.

Of course, the Greek Führer failed to calculate the impact his confession would have. Though he rushed in panic to refute the statement, it was already too late. Moreover, the examples he used to try to mitigate his confession only served to work against him.

By comparing the murder of Fyssas with those of Grigoris Lambrakis and Nikos Temponeras, he is admitting that the Fyssas murder, too, was a case of the right eliminating a political rival.