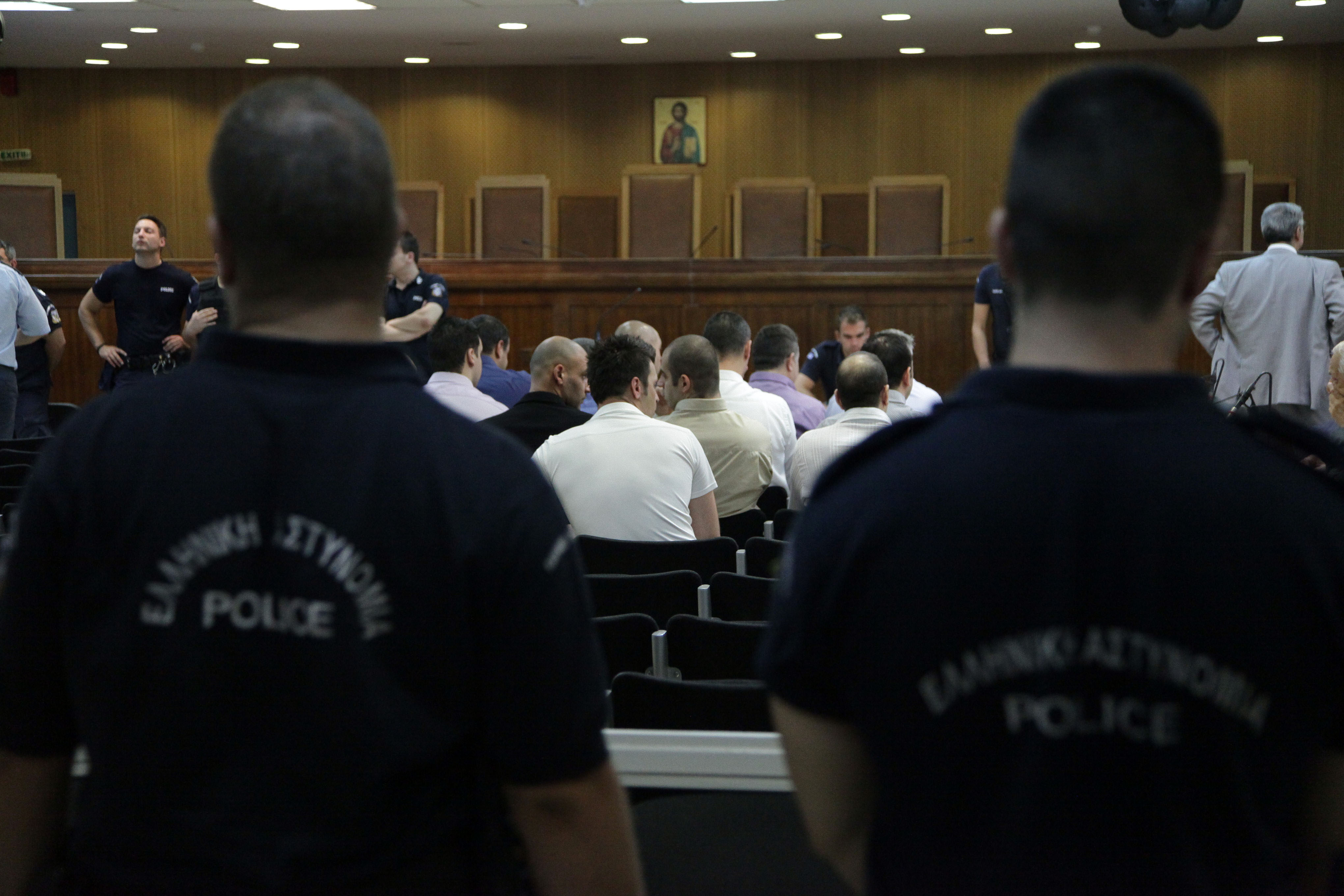 Day 10: DECIDING THE MATTER OF CIVIL ACTION; THE DEFENSE OBJECTS

As regards the public nature of the trial, the same conditions applied. Access to the hall in Korydallos prison purposely designed for the trial was granted only to witnesses, accredited journalists and photographers. It remains impossible for the general public to attend the trial unless they have been granted special permits. The seating area, again expressly designed for the purpose of the trial, was overflowing with crowds of witnesses who had arrived under the impression that the court would begin to call witnesses to the stand.

Eighteen defendants, most of whom are in custody, were present. The remaining defendants were, for the most part, represented by their counsel. Antonis Boletis was declared absent, without the court attempting to confirm whether the claims that he is deceased are true.

The court then dealt with a number of requests from the counsel for the civil action, including the request to relocate the trial, that audiovisual coverage be provided, and that equipment be provided to allow audio, video and photographic evidence be presented.

As regards the request that the trial be relocated, the prosecutor, Adamantia Oikonomou, denied the request, noting that a decision had already been made at a previous hearing. At that time, the court had pursued the issue without receiving a response from the relevant authorities. However, the relevant ministry has arranged for a different venue, which will be ready for use by September. Thanasis Kampagiannis, civil counsel for the Egyptian fishermen, pointed out that, with the exception of its president, Dimitris Mokkas, all members of the three-member council of Athens Appeals Court turned down the request for the immediate transfer of the trial. His colleague, Kostas Papadakis, added that the current venue has presented a number of difficulties that have hindered the proceedings, making particular mention of the trial of the Conspiracy of Fire Cells (SPF) taking place in an adjacent room. “For security reasons, and in order to ensure that the trial is accessible to the public, the court must make provisions for a suitable venue and ensure that, even as Greece is collapsing, the replacement venue that has been promised will actually be ready in two months.” The defence counsel supported the prosecutor’s proposal, which was, in turn, accepted by the presiding judge.

As regards request that audiovisual coverage of the trial be permitted, the prosecutor proposed that this be denied. Antonis Adanasiotis (counsel to the PAME trade unionists) reminded the court that the 1975 trial of the junta leaders was filmed. Thanasis Kampagiannis stressed that “This is a historic trial. We are dealing with is a criminal organisation that is interwoven with a political party. Thus it is crucial that what is said in the trial not be lost, but recorded.” After citing examples from legal theory and case law, Takis Zotos (another counsel for the Egyptian fishermen) argued that the only risk involved in filming the trial was that the proceedings might morph into a theatrical performance. However, he insisted that the proceedings can be managed in order to protect the integrity of the trial and that the coverage could be sanctioned by the judge. “If the shots are stable and aren’t peppered with different angles or close-ups, the courtroom will not turn into a theatre. Either way, the court can at the very least allow for the trial to be recorded,” he argued. Panagiotis Michalolias (counsel for Golden Dawn leader Nikos Michaloliakos) asked that civil action counsel refrain from using fanatical expressions that in no way aid the proceedings. He pointed out that the defendants have already suffered two traumatic years of persecution in the media. Angelos Angeletos, counsel for Eleni Zaroulia MP, added that filming the trial would not guarantee that a comprehensive view of the trial would be provided to the public as the film would be edited and the result determined by the editor’s selection of moments that interest him.

The prosecutor also proposed denying the request that the trial be recorded, deeming it unnecessary given that transcripts can be prepared by the court clerk. Counsel for the civil action counsel expressed its disappointment with the prosecutor’s position. Violetta Kougiatsou , counsel for Pavlos Fyssas’ mother, expressed her opinion that recording the proceedings is essential so as to have a precise and comprehensive record of the questions and answers, a task beyond the abilities of the court clerk. The defence counsellors for Efstathios Boukouras (Vasiliki Pantazi), Markos Evgenikos and Anastasios Pantazis (Mr Arvanitis), Ioannis Aggos (Mr Sotiropoulos) and Aristodimos Daskalakis, Giorgos Petrakis and Giorgos Stambelos (Mr Spyropoulos) also objected to the prosecutor’s proposal. The presiding judge accepted the prosecutor’s proposal and denied the request for audiovisual coverage of the trial.

As regards the request for technical equipment with which to present audio, video and photographic evidence in court, the prosecutor reserved the right to respond later in the proceedings. The presiding judge, however, accepted the request, given that counsel for the civil action has stated that much of the evidence against the defendants is in video and photographic format. Counsel for the civil action added that they could not see why the decision to admit such evidence was being stalled; to accept it would speed up and render a better overview of the proceedings.

Counsel for the civil Action had summoned over 35 witnesses, around 15 of whom were in attendance. The defence summoned over 80 witnesses, around 20 of whom were present. Those present are henceforth released from any obligation to attend subsequent hearings; each one will be informed by phone in advance of the precise date assigned to them by the court. The list of witnesses is likely to be expanded.

5. Objections of the defence counsel

Panagiotis Kassis, counsel to defendant Anastasios Hilios, questioned the jurisdiction of the court to try two charges brought against his client – weapon possession, with the possibility of increasing the charge to aggravated possession, and the supply and possession of drugs for the personal use of someone who is not a drug addict.

Mr Michalolias pleaded the absolute invalidity of the proceedings against his defendant Nikos Michaloliakos. He argued that the court had strayed from the provisions that applied in the preliminary stages of the investigation and at the start of the criminal prosecution. Specifically, he pointed out that his client was not given sufficient time to prepare his deposition, nor was he provided with a comprehensive description of the case against him. He added that the charge of weapon possession brought against his client was inadmissible given the three-month period during which parliament had the right to authorise the persecution of a sitting MP had expired. He alleged this was a violation of his client’s human rights and accused the then government of intervening in the judiciary. He argued that the criminal prosecution was not an initiative taken by the judiciary, but by the executive. He added that Antonis Samaras (former prime minister), Nikos Dendias (his citizen protection minister) and Prokopis Pavlopoulos (a New Democracy MP) had violated the principle of the presumption of innocence. He attacked the press which, for political reasons, at the time presented the arrests of Golden Dawn MPs as a “success of the Samaras government”. The prosecution was nothing more than the result of the initiative of the then government, he added.

Finally, he raised the infamous videoed conversation between Takis Baltakos, who served as cabinet secretary in the Samaras government, and Golden Dawn MP Ilias Kasidiaris and spoke of the relationship between the then justice minister, Charalambos Athanasiou, and the then head of Athens First Instance Court, Maria Tsami, as well as Supreme Court prosecutor Efterpi Koutzamani.

In the same vein of claiming the proceedings to be invalid, Dimitra Velentza (counsel for Nikos Kouzilos) raised the matter that in a mere four to five days, the prosecutor managed, on the basis of a photocopy of a falsified party statute, to draw conclusions about Golden Dawn that were groundless and had no basis in law.

The trial will resume on 14 July 2015, when the court will continue to hear objections from the defence.